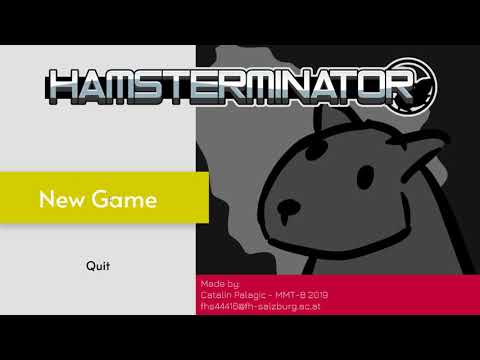 In the year 2069, the world is being overrun by a dangerous coalition of bugs and worms. You, professional pest exterminator Ham Samster are chosen to become our best chance of survival: The Hamsterminator. You will be sent back in time to sort out this invasion before it becomes critical. Only your bug killing expertise combined with the power of advanced technology can reverse the harm. and save the planet.

Use the advanced futuristic technology at your disposal to eliminate alien creatures. Your Hamsterball enables you to launch yourself at invaders from any position in space and crush them instantly, leaving no trace behind. While preparing your shot, the Integrated-Avanced-Short-Burst-Time-Dilation-Control-Unit™ - in short IASBTDCU™ - allows for better aim by slowing down time for a short amount.

Once you've dealt with all invaders in an area, the exit will open and you can proceed to the next infested area. All this future tech doesn't run on hopes and dreams though, so try to be as efficient as you can with your launches. The more efficient you are, the better your final rating will be.

We only have one chance, but you can be the hero we need. A sacrifice from the present, sent to the past to save our future.

The main feature of the game is the custom 2D physics system I had to write for the hamsterball behaviour. It partially simulates real life physics with many adjustments to facilitate fun and engaging gameplay. For example the system implements drag, but does not implement rolling behaviour because it sometimes causes realistic, but unexpected behaviour when bouncing off walls. The second speciality is the ability to change the time-scale of the whole physics system, allowing for slow-motion or fast-forward type effects.

All visuals are also made by me. Obviously, way more time went into the code than the graphics, but there are plans to add more content in the future. Audio is also currently missing, with plans of adding royalty free music and sounds.
Animations for level assets are frame-based and menu / UI animations are coded in order to make them look and feel smooth.

Levels are stored in .txt files, easily editable and lightweight. Adding levels to the game is a matter of creating a text file with the correct formatting and changing a value in the main code. Each tile in the level has it's own ID. One character is allowed per tile, with numbers and letters allowed as IDs.
Highscore data is also saved and updated in simple .txt files (not secure at all, but simple)

Currently the game is only playable on PC, but the positive aspect of it is you only need to use the mouse.